(image: Pulse, by Anne-Laure Autin, part of the series Locked In)

“Migraine aura” is the neurological term for a visual, sensory, motor or verbal disturbance that accompanies about 1/4 of migraines. Over a year ago, photographer Anne-Laure Autin had one for the first time. Speaking of her experience Anne-Laure notes she felt something pop in her brain and pulse through her. Suddenly paralysed, she couldn’t move, couldn’t call for help, couldn’t even open her eyes. This moment, which Anne-Laure defines as the most terrifying of her life, provided the inspiration for her photographic series Locked-in. I caught up with OPEN16 solo shortlister, Anne-Laure, to find out more about her photographic process, and the inspiration behind her series.

BPF:  Your photo series, Locked In, represents your experience with migraines. How did you approach visually communicating an ailment which is not visible?
ALA: In hindsight, what fascinated me most about my experience of an aura is the fact that, while paralysed, I had actually felt in movement somehow, trying to “escape” my own body. It’s a rare occurrence (most auras are visual) and a feeling that is very hard to accurately verbalise. How do you describe something unlike anything you know, to someone who’s never lived through it either? I suspect it’s a bit like trying to explain music to a deaf person. Words can deconstruct the event but I wanted people to feel it instead. And I hoped to achieve that with imagery. My whole Locked-in series is built on highlighting those two opposite States of Being happening concurrently, the movement and the paralysis. On a simple technical level, long exposures translated the agitation of my mind and multiple exposures allowed me to layer in the idea of an immobile body. As a result, the work has a surreal feel to it, which is almost logical I find, given that I am indeed portraying an invisible ailment. (images top-bottom: Bound, Fight, by Anne-Laure Autin, part of the series Locked In)

What inspired you to communicate a physical condition through art?
After my first episode, the doctors in the ER told me I might have a brain tumour or possibly MS. That was extremely scary; as were the following weeks waiting for the MRI and tests results. I became confronted with my mortality in a very real way. Honestly, I started creating art purely in the hope to break free from the anxiety. After a little while though, I realised that there was more to this project than personal healing. I also had an opportunity to make people reflect on the obscure connection that exists between our body and our mind. I believe it is something that most of us rarely deeply contemplate, except maybe on the days when it stops working properly!

Through the images, are you attempting to communicate a discomfort to the viewer?
I am not per se, but I am not surprised if some people feel discomfort. I never intended to suggest a way to react to the images, I only wanted to illustrate how I had felt. Admittedly, being trapped inside your own body isn’t particularly pleasant, and I think that permeates in the photographs. But in the end, this experience has also been very positive for me and there are signs of hope sprinkled all across the work. Some people pick up on it, some don’t. I think everyone approaches the images with their own personality, their own history, taste, experiences, biases, etc. Despite all the intent in the world on an artist’s part, I believe how the viewer ultimately feels in front of a photograph is still very much up to them.

How did the production of the series, and specifically your decision to hand print the series, relate to the concept?
The photographs were originally shot digitally and each one of them is a composite. Most are made out two or three exposures per picture, and up to seven different ones. There is no illustrative work whatsoever (I cannot draw for the life of me), it is all pure photographic work. The ‘thunderbolt’ on Pulse for instance has not been added in, as people sometimes assume, it is simply a hair part in one of the layered photos. Digital impressions felt very sharp, way too crisp for the subject matter. Printing the series as Van Dyke Browns, an alternative process from the 1880s, made a lot of sense. The softness in the print, I believe, really adds to the surreal quality of the work. And as I’m really interested in contrasting juxtapositions, it felt a bit like the cherry on the cake to combine digital techniques with an antique hand printing process. 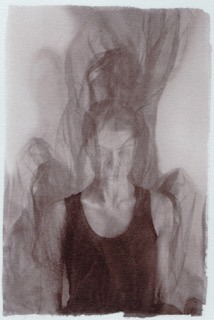 (Images top-bottom: Wave, Lost, by Anne-Laure Autin, part of the series Locked In)

When selecting the subjects for your photography, what do you look for,  particularly for such a personal project?
For Locked-in, I first photographed a former professional model with a girl next-door look. We’d worked together before and she’s amazing so I knew I would get ‘what I wanted.’ But once I saw that there was more to the work than healing my angst, I realised I need to give much more thought to the selection of my subjects. Ideally I would have created a series of self-portraits, but truthfully, I think that would have been too traumatic for me. Working in Photoshop was enough to make me cry, when an image brought me back to how I had felt. So in the end I chose to work with the person most like me, DNA-wise and all — my eldest daughter. For the series I’m currently working on, called Blood Line, the choice of the models has been extremely carefully considered. I believe that as a conceptual photographer, it is one of the first
decisions you ought to make, as it is an inherent, vital and decisive part of the work.

You hold an MSc in Theoretical Mathematics, how does your academic training  influence your artistic practice?
I’m not entirely sure. I have a friend who tells me she can sense my mathematical background in the way I compose my photographs. But it’s certainly not something that happens consciously (if it does at all). The Second Law of Logic basically states that two opposite things cannot be true at the same time. Funny enough, I tend to photograph subjects that almost disprove that: strength and vulnerability in women, movement and paralysis in Lockedin.
Unity and divide is a part of my next project. There’s a duality in my fascination for Truth and my love for Human Nature, where no logic seems to prevail, but it does not seem irreconcilable to me. So I do think that the part of my brain that generated my love for pure mathematics is also responsible for picking out the topics and concepts that interest me in photography. There are so many parallels between art and maths anyway! I find there’s beauty in both of them. There will always be heated discussions on what Truth means, in both disciplines, and that’s absolutely fascinating to me, but I’ll stop here before we derail to a philosophical debate.

(Image: Blind Mute, by Anne-Laure Autin, part of the series Locked In)